Commission for the Queen 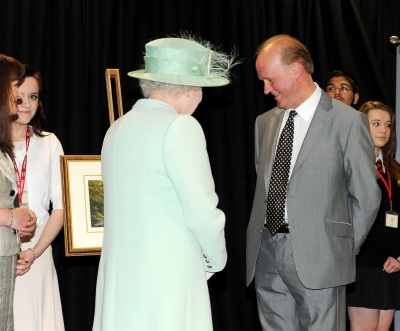 I was commissioned by The University of Central Lancashire to paint a picture for the Queen, on her visit to Burnley University,on the 16th May 2012. I was told to include the River Hodder at Whitewell in the painting, as the Queen owns a lot of the land in that area including The Inn at Whitewell (Duchy of Lancaster). I used the River Hodder below The Inn at Whitewell for the painting as the Queen has eaten there in the past. I also added a Kingfisher in the painting. I had to explain the view to the Queen as she  didn't recognise it from that vantage point. After quite a while she smiled when she realised it was Duchy land, saying she should know it. When The Duke of Edinburgh viewed the picture, the Queen had to start explaining to him!

I was asked to print 65 fullsize images of the original for the dignortories also present on the day.

The Queens painting can be seen under Finished Commissions  No Q2. Limited Edition Prints are available also.